We Are Your Full-Service Packaging Provider

we established an end-to-end agency to manage everything from design and structural engineering to fulfillment. When you work with us, you’re getting our team of expert advisors on your project, but more than that, you’re getting peace of mind and confidence in your entire packaging strategy.
Start A Project

We'll keep you in the loop with our latest news. 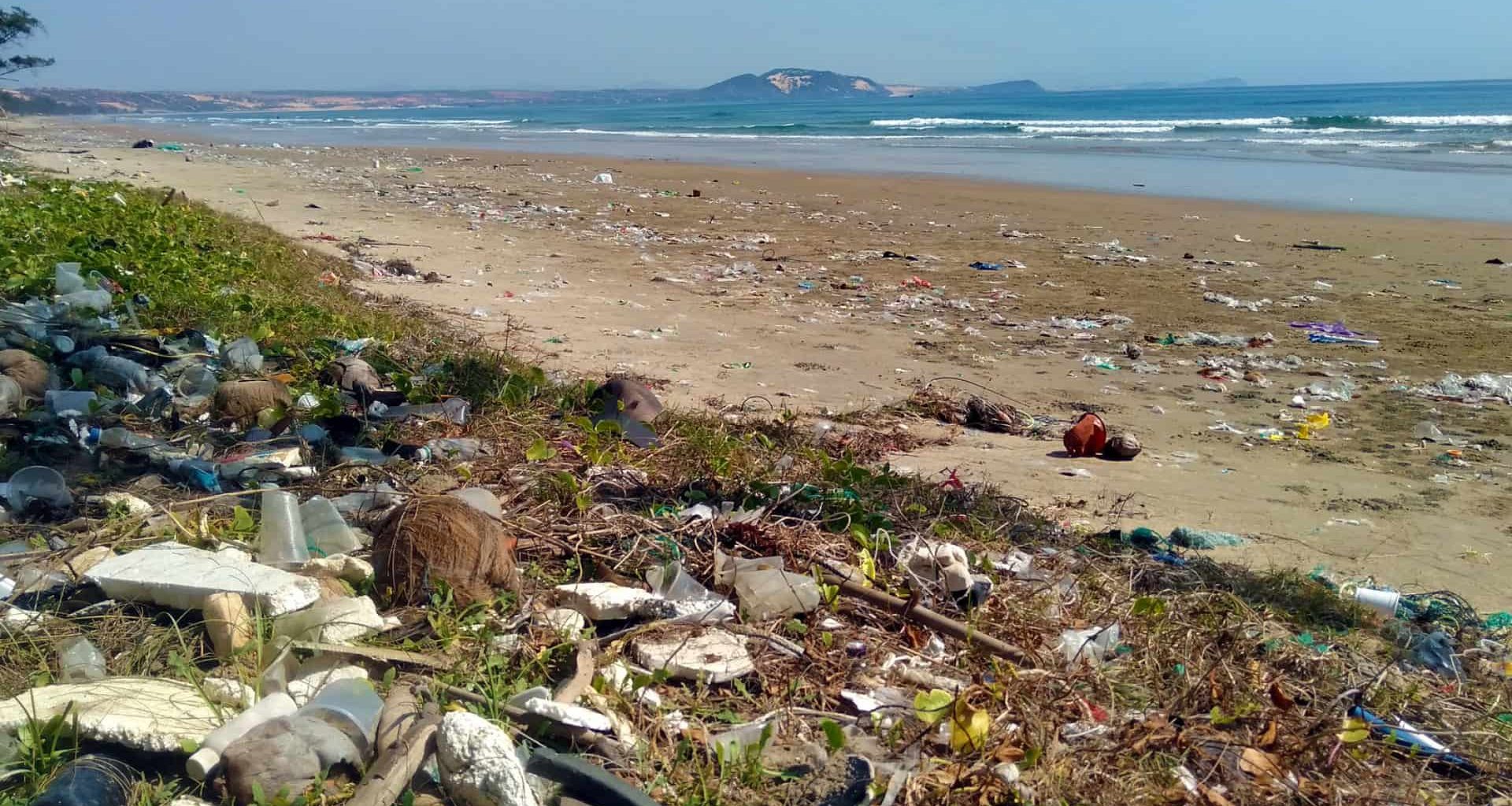 As humans begin to reckon with the devastating effects of plastic on marine life, companies are developing innovative materials made from ocean plastic pollution.
0
Shares
0
0
0
0

In an industry drowning in eco-friendly lingo, the phrase “sustainable packaging” has become eerily similar to plastic: used easily, ubiquitous, and misunderstood. Throughout the packaging world, brands and consumers are seeking out sustainable alternatives to plastic, but they may not be familiar with the increasingly diverse selection of innovative options. Recyclable, biodegradable, compostable, bioplastic—figuring out if the packaging in your hand actually contributes to a greener planet can be confusing. Fortunately, there’s a new wave of recycled ocean plastic materials that not only replaces virgin plastic, but also diverts mismanaged plastic waste from the ocean.

Astonishingly, it is estimated that only 9% of plastic has ever been recycled. In recent years, however, the fashion industry—responsible for about ​10%​ of all greenhouse gas emissions—is beginning to utilize materials that transform existing plastic waste into durable synthetic fabrics.

Materials manufacturers across the globe are taking on this ambitious yet straightforward process. It begins with collecting plastic bottles within 50 kilometers of waterways and coastlines located in countries without robust recycling operations. The bottles are then washed, chopped, melted, and cooled into raw plastic chips. In the final step, the chips are fed through extrusion and texturing machines to create synthetic fibers ready for use in fashion, automotive, and home interior industries.

Repreve Our Ocean​ is the world leader in recycled ocean plastic material, providing a variety of nylon yarns for brands like Ford, Teva, Quiksilver, and Brentwood Homes. They set the trend in 2007 with their first fibers made from recycled materials, and fashion megabrands like adidas and Nike followed suit, developing their own proprietary ocean plastics materials. In collaboration with ​Parley for the Oceans​, adidas created the Parley Ocean Plastic™ fiber, a performance yarn spun from upcycled plastic waste that is used to manufacture sportswear and shoes. Nike has also made small strides in reducing their carbon footprint. According to the ​their sustainability page​, through the use of recycled polyester, the company has diverted 7 billion plastic bottles from landfills since 2010. One of their ​latest shoes​ is made using recycled polyester yarn similar to Parley Ocean Plastic™.

But before breaking down the benefits of ocean plastic materials, let’s have a look at the complicated and seemingly eternal relationship between humans and plastic.

A Synthetic Bond: How We Fell in Love with Plastic

Synthetic plastic is a society-altering breakthrough that was once born from good intentions. Like humankind’s relationship to the automobile or social media, however, we were unaware of how dependent we would become. In 1869, inventor John Wesley Hyatt answered a $10,000 challenge from a New York firm to create a material that would replace ivory. He treated cotton fiber cellulose with camphor to create a strong, malleable material that proved to be a suitable substitute for ivory as well as other animal and natural substances like tortoiseshell, linen, and horn. Four decades later in 1907, the Belgian chemist Leo Baekland invented the first fully synthetic plastic to replace shellac—a resin made from the lac bug—which was used for electrical wire insulation. Presciently marketed as “the material of a thousand uses”, Bakelite was easily mass produced and inexpensive. Chemical companies across the globe took interest in these early advances and started to invest heavily in polymer research.

For plastics to make the leap into the modern age, the industry would require a multi-year, global conflict: World War II. As natural resources were scarce, necessity fueled technology. Invented in 1935, nylon was used in place of silk for parachutes and rope, Plexiglas for airplane glass, and additional new plastics replaced familiar natural materials. These advances in technology continued into the post-war era civilian market, propelled by economic and population booms. According to the Science History Institute, “After experiencing the Great Depression and then World War II, Americans were ready to spend again, and much of what they bought was made of plastic.

By the 1960s, we were hooked. After a decade of uninhibited plastic consumption, plastic waste started washing up on beaches and clogging the stomachs of marine life. While plastics improved quality of life through sanitary, life-saving medical devices, computers and food containers, civilization found itself swimming through the remnants of its creation. Single-use plastic increased exponentially throughout the 70s, 80s, and turn of the century, and now it’s a way of life.

Greenwashing Our Way to an Ocean of Plastic

Originally introduced by the plastics industry, recycling was marketed as the solution to our plastic problem. While local governments all over the world invested billions to establish recycling facilities, corporate America funded the Keep America Beautiful campaign and non-profit, perhaps one of the most successful examples of greenwashing. Remember the “Crying Indian” commercial from the 1970s? Chief Iron Eyes Cody was actually an Italian-American actor, and the campaign was funded by single-use plastic and tobacco corporations including Pepsico, Dart, Nestle, McDonald’s, Coca-Cola, Altria, and Dow Chemical. Rather than owning up to their destructive environmental practices, in the name of profit they continue passing the responsibility to the consumer—with slogans like “People start pollution. People can stop it.”—knowing full well that it’s much cheaper to manufacture virgin plastic than to recycle.

The American recycling system is broken, resulting in astonishing amounts of ocean plastic. Up until recently, municipalities across the nation would sell their plastic waste to China, ostensibly to be recycled. In reality, upwards of 91% wasn’t recycled; instead, it was sorted then illegally dumped into waterways, eventually reaching the ocean. In 2019, most Asian countries stopped accepting American plastic waste, and now local landfills are forced to expand their operations to make room for compacted bales of plastic. Even though your town says it’s recyclable, that strawberry container you tossed into the blue bin is probably headed for the landfill. According to the Plastic & Climate Report, less than 10% of US plastic waste is recycled, some is incinerated in waste-to-energy facilities, and most sits in your local landfill or worse is classified as “unaccounted”.

This unaccounted plastic pollutes landscapes and oceans across the planet. Each year, at least 10 million tons of plastic reach the ocean where it sinks, washes up on the shore, or gets caught in one of five massive gyres continually swirling in the blue expanse. As scientists learn more about the ocean’s incredible capacity for carbon sequestration, plastic presents a particularly volatile issue to marine and human health. Floating in the ocean under the sun, plastic degrades into microplastics and eventually reaches the ocean floor. The degradation process releases toxic chemicals—known as persistent organic pollutants—that are dangerous to humans and marine animals. Furthermore, it was recently discovered that plastic photodegradation “triggers the production of greenhouse gases,” which is expected to increase as more plastic ends up in the sea.

And perhaps the most concerning realization of all, microplastics may be disrupting the complex oceanic food chain that keeps global temperatures stable. Phytoplankton and zooplankton capture carbon dioxide at the surface, transporting carbon deep into the ocean where it’s stored away for centuries. According to a recent study in Environmental Science & Technology, “There is growing evidence that these plankton—like other marine species—are ingesting ever greater quantities of micro-plastic debris with potentially significant impacts on their metabolism, reproductive success, and mortality rates.” Essentially, we’re poisoning the organisms that are responsible for sequestering 30-50% of human CO₂ since the industrial age.

While repurposing plastic waste for mass produced clothing and shoes is a step in the right direction, these products continue to pollute during their relatively brief existence as our favorite wardrobe items. Emerging research has revealed that when a normal load of clothing is washed in standard home washing machines, more than 700,000 microfibers are released into sewage treatment plants, and eventually aquatic habitats. Out of the three materials tested—acrylic, polyester, and a cotton-polyester blend—the two fully synthetic fabrics released the greatest number of microfibers. Just another reminder that even recycled plastic could have subtle yet lasting effects on the oceans from which they were collected.

Ultimately, it comes down to corporate responsibility, but consumers play a small part in demanding eco-friendly materials and products. Recycled ocean plastic materials are undoubtedly an excellent alternative to virgin plastic. Billions of bottles are diverted, fossil fuels stay in the ground, and factories emit fewer greenhouse gases and conserve water. Yet the industry is still in the very early stages: Only 1% of material used for clothing is recycled, and ocean plastic fibers usually cost about 10% more than virgin plastic fibers. As demand increases, prices will go down. When creating clothing or other short-lifespan products though, opting for natural cellulose, protein, or blended fibers is ideal.

Industries should also increase the demand for recycled ocean plastic in more permanent applications. Repreve Our Oceans, and similar companies like Waste2Wear, work with furniture, flooring, and automotive companies to produce upholstery fabric, floorboards, carpet lining, and car interior upholstery from ocean plastic. These products can remain intact and separate from vulnerable habitats for decades.

When plastic just can’t be avoided in your packaging project, ocean plastic materials present an eco-friendly, affordable, and high-quality replacement for virgin plastic. To learn more about our ocean plastics and how they are utilized in Zenpack projects, reach out to one of our experts who can provide material swatches and case study samples.

We'll keep you in the loop with our latest news.

Responding to a Pandemic

MMaterials & Tech
Read More
Thermoformed plastic trays are a mainstay of retail packaging. They give the snug fit and beautiful presentation to chocolate samplers, medical devices, cosmetics and a plethora of other beautifully packed items. There are many plastic abbreviations thrown around in thermoforming.
MMaterials & Tech
Read More
We list the common box style in the market and also some enhancement features too. Please check and see which box style or features can use for your package solution.